Wadi Al Makhrour flows from the Beit Jalla highland in the east towards the Mediterranean in the
west. The topographic slope of the Wadi in the median part is approx. 12 o -15 o , while on both sides
it exceeds 25C -35C . The erosion activities that have been acting since thousands of years, had led to
the exposure of the older geological strata on both sides of the Wadi. On the foots of both sides, rocks
of Cenomanian age do outcrop and gently dip towards westwards; the dipping angle increases going
downstream in the Wadi. The main lithology of the rocky section is composed of different calcareous
beds, most of them are layered thin-bedded limestone strata in the base that grade up to be thick bedded nodular limestone at higher latitudes where from which we extracted our herein described
fossil assemblage. 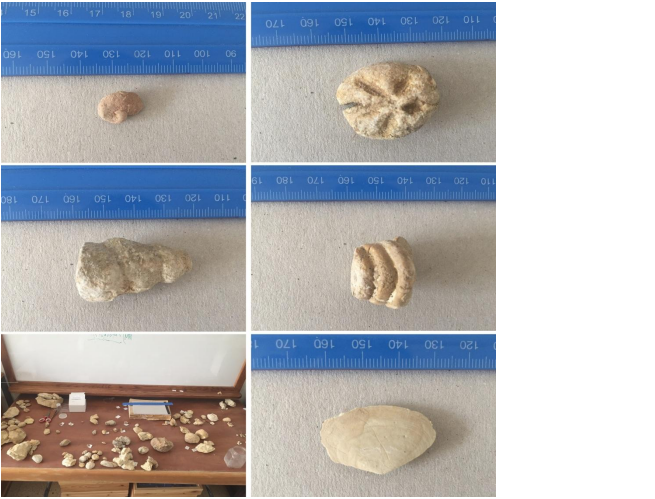 A survey for the Paleontology specimens from the valley were collected by the
PINS\PMNH team with a geologist expert (Dr. Taleb Al Harithy) to study the fauna of the area that
back for several million years to understand the status of the ecology and habitat that exist today in
the area. More than 35 species of fossils were detected and Identified by experts (see Figure 16)
Figure 16 Fossils from Al-Makhrour Valley.
Al Makhrour area is well –known as the governorate’s most fertile land and its traditional breadbasket.
The valley is announced as Important Bird Area (IBAs) (Birdlife International, 2018a) and was
designated as a Key Biodiversity Area (Birdlife International, 2018b) at national and global levels.
AL Makhrour Valley and its surroundings falls in the Mediterranean botanical and zoogeographical
region (Zohary, 1973) and the Mediterranean biogeographical zone (Soto-Berelov, et al. 2012). It is
also an important part of the hydrological system that replenishes the western aquifer. The mean
annual temperature in this area is 16˚C. The annual precipitation is between 601mm-688 mm, with
highest elevation that reaches up to 804m above sea level. The soil is mainly a mixture of terra rossa
and brown rendzina (Isaac, J. et-al, 2010).